Turquiose with white sponging and glitter

Well..it is Thursday...and tonight a friend and I are going to see the sneak preview of 21 Jump Street.  If any of my readers are old enough to have seen the original...Johnny Depp was the star.   Whew...cute!
So...tonight...going to see Channing Tatum...yes...he is more HOT!
Wearing a pretty teal shirt with white and silver design on it...with some rhinestones of course.
So...I needed a little something to match: and here it is...please ignore my middle finger cuticle...I snipped it as soon as I saw it in the pic.  But...didn't want to set back up to do the photos again...since it was getting late and hubby was heading home from the tax office.
Below are the polishes I used: The base color is the OPI Austin-tatious turquoise. I did not have a teal that was dark enough...so resorted to this fall back color...but I still love the color and it looks close enough to the teal in my shirt.  I then sponged with the Sephora by OPI color "Who Let the Dorks Out" which was from their Glee line.  I absolutely love Glee..and religiously dvr it and watch it every week!!!  I then sponged with my latest OPI purchase...Alpine Snow.  I know...I'm supposed to be trying to not buy OPI...but it is just a basic white (Excuse the addict).  Then I put some stripes in with the SoEasy Stripe Rite in White.  Well...now here is where I went a little overboard.
I started with my 99cent purchase of NYC Starry Silver Glitter from my Target Clearance haul.   But...it just didn't seem glittery enough...so I finished up with some China Glaze Techno which added just the right touch.  A little top coat (2 coats for the glitter)...by the way I always start with OPI Nail Envy as my base coat.  I included a little pic of my absolute favorite cuticle oil...which I am running out of...I got it on QVC years ago..with an awesome metal nail file....that is for shaping...and it is called TIPS.  I love it...but my stash is diminishing...so I've been also using AvoPlex cuticle oil.
I'll let you all know...what I think of 21 Jump Street...and hopefully I have enough time to do my nails tonight after the movie.  The theatre it is sneak previewing at is on the other side of the City and I will have to drive a friend back to our work and then track back to my east side of the city after the movie.  Yikes...going to be a lot of driving.  But...it will be fun...I just know it!
Posted by Unknown

The Villain of all things evil...and fabulously long nails of course!!! 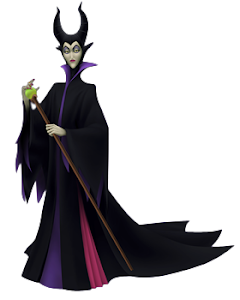 Maleficent...my opinion is the only opinion.